However, KB 1034165 contains several important limitations which should be considered and addressed in solution design. Limitations of multi-writer mode are:

Let’s focus on 8 ESXi host limit. The above statement about scalability is a little bit unclear. That’s the reason why one of my customers has asked me what does it really mean. I did some research on internal VMware resources and fortunately enough I’ve found internal VMware discussion about this topic, so I think sharing the info about this topic will help to broader VMware community.

Here is 8 host limit explanation in other words …

The best way to fully understand specific behavior is to test it. That’s why I have a pretty decent home lab. However, I do not have 10 physical ESXi host, therefore I have created a nested vSphere environment with vSphere Cluster having 9 ESXi hosts. You can see vSphere cluster with two App Cluster Instances (App1, App2) on the screenshot below.

Application Cluster instance App1 is composed of 9 nodes (9 VMs) and App2 instance just from 2 nodes. Each instance is sharing their own VMDK disk. The whole test infrastructure is conceptually depicted on the figures below.

Test Step 1: I have started 8 of 9 VMs of App1 cluster instance on 8 ESXi hosts (ESXi01-ESXi08). Such setup works perfectly fine as there is 1 to 1 mapping between VMs and ESX hosts within the limit of 8 ESXi hosts having shared VMDK1 opened.

Test Step 2: Next step is to test the Power-On operation of App1-VM9 on ESXi09. Such operation fails. This is expected result because 9th ESXi host cannot open the VMDK1 file on VMFS datastore. 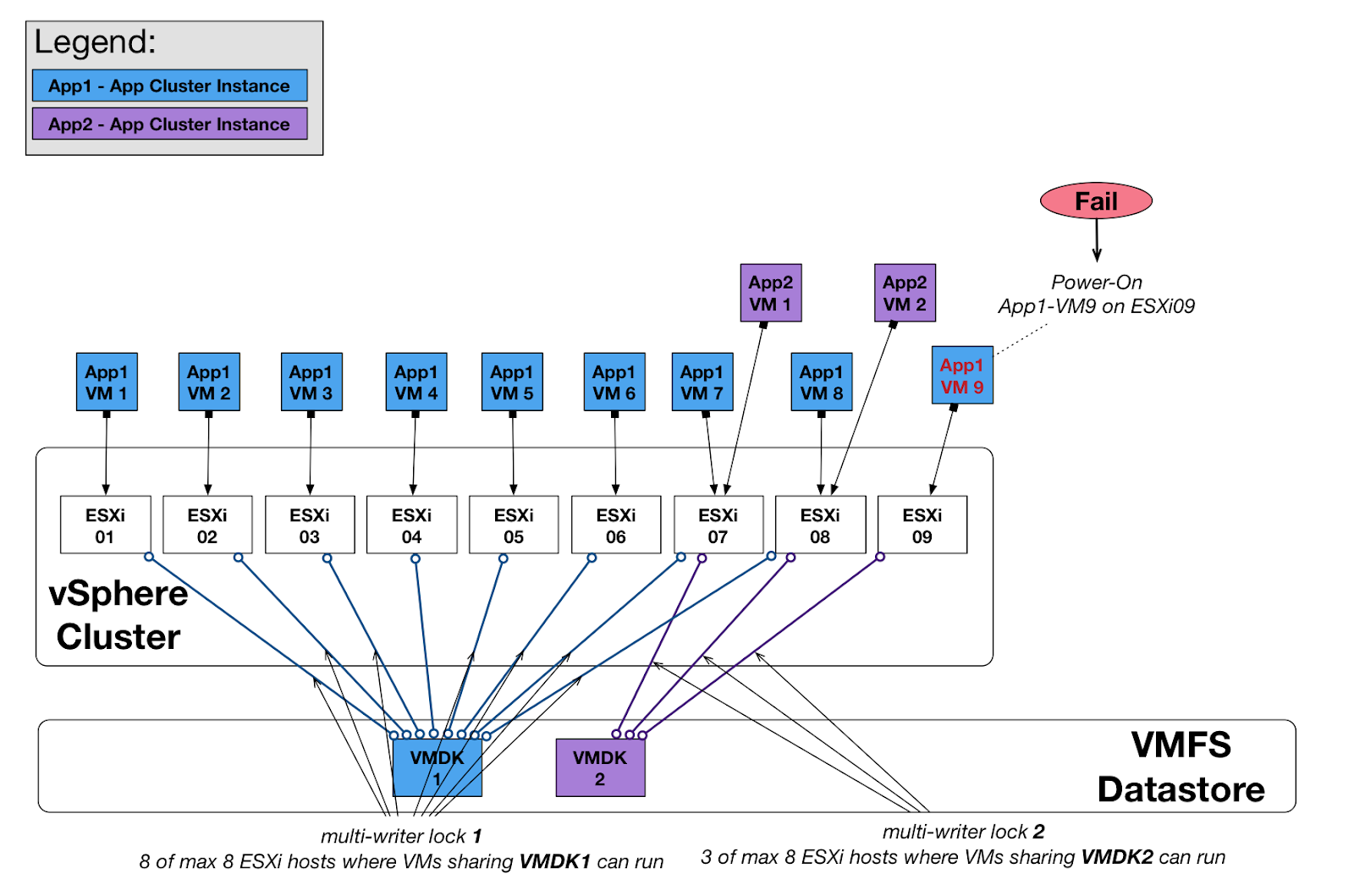 The error message is visible on the screenshot below.

Test Step 3: Next step is to Power On App1-VM9 on ESXi01. This operation is successful as two app cluster nodes (virtual machines App1-VM1 and App1-VM9) are running on single ESXi host (ESX01) therefore only 8 ESXi hosts have the VMDK1 file open and we are in the supported limits.

Test Step 4: Let’s test vMotion of App1-VM9 from ESXi01 to ESX09. Such operation fails. This is expected result because of the same reason as on Power-On operation. App1 Cluster instance would be stretched across 9 ESXi hosts but 9thESXi host cannot open VMDK1 file on VMFS datastore. 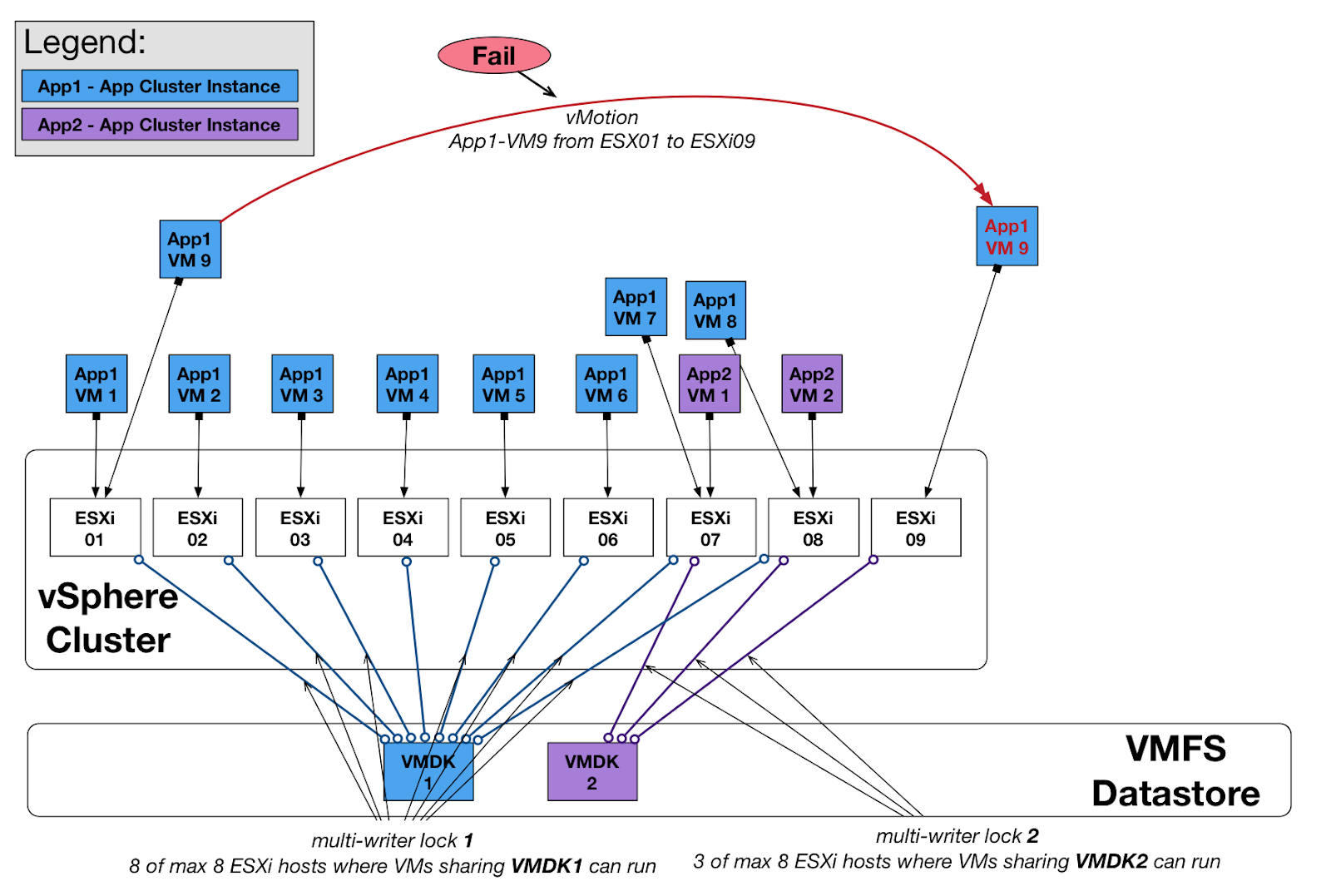 The error message is a little bit different but the root cause is the same.

Test Step 5: Let’s test vMotion of App2-VM2 from ESXi08 to ESX09. Such operation works because App2 Cluster instance is still stretched across two ESXi hosts only so it is within supported 8 ESXi hosts limit. 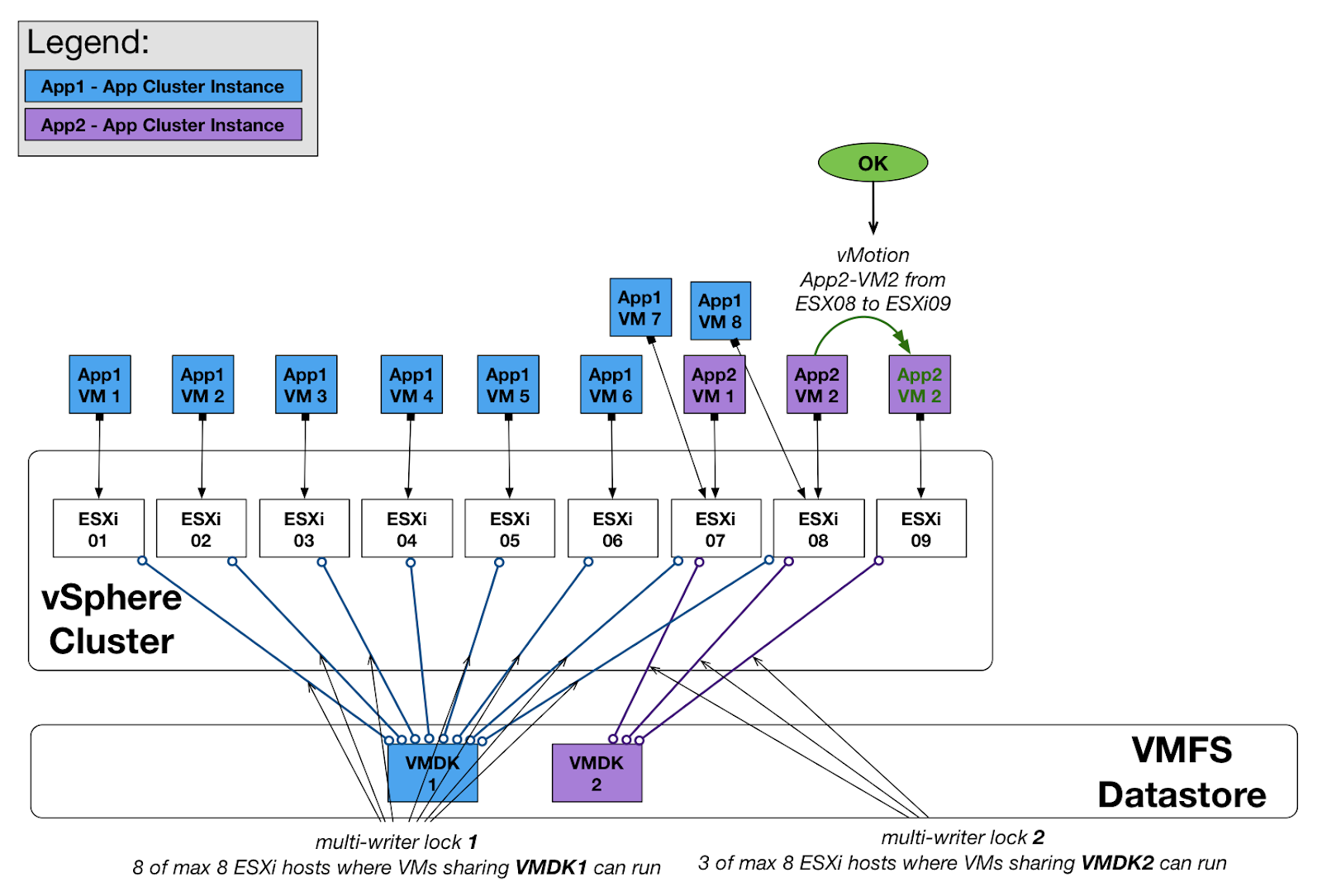 Test step 6: The last test is the vMotion of App2-VM2 from vSphere Cluster (ESXi08) to standalone ESXi host outside of the vSphere cluster (ESX01). Such operation works because App2 Cluster instance is still stretched across two ESXi hosts only so it is within supported 8 ESXi hosts limit. vSphere cluster is not the boundary for multi-write VMDK mode. 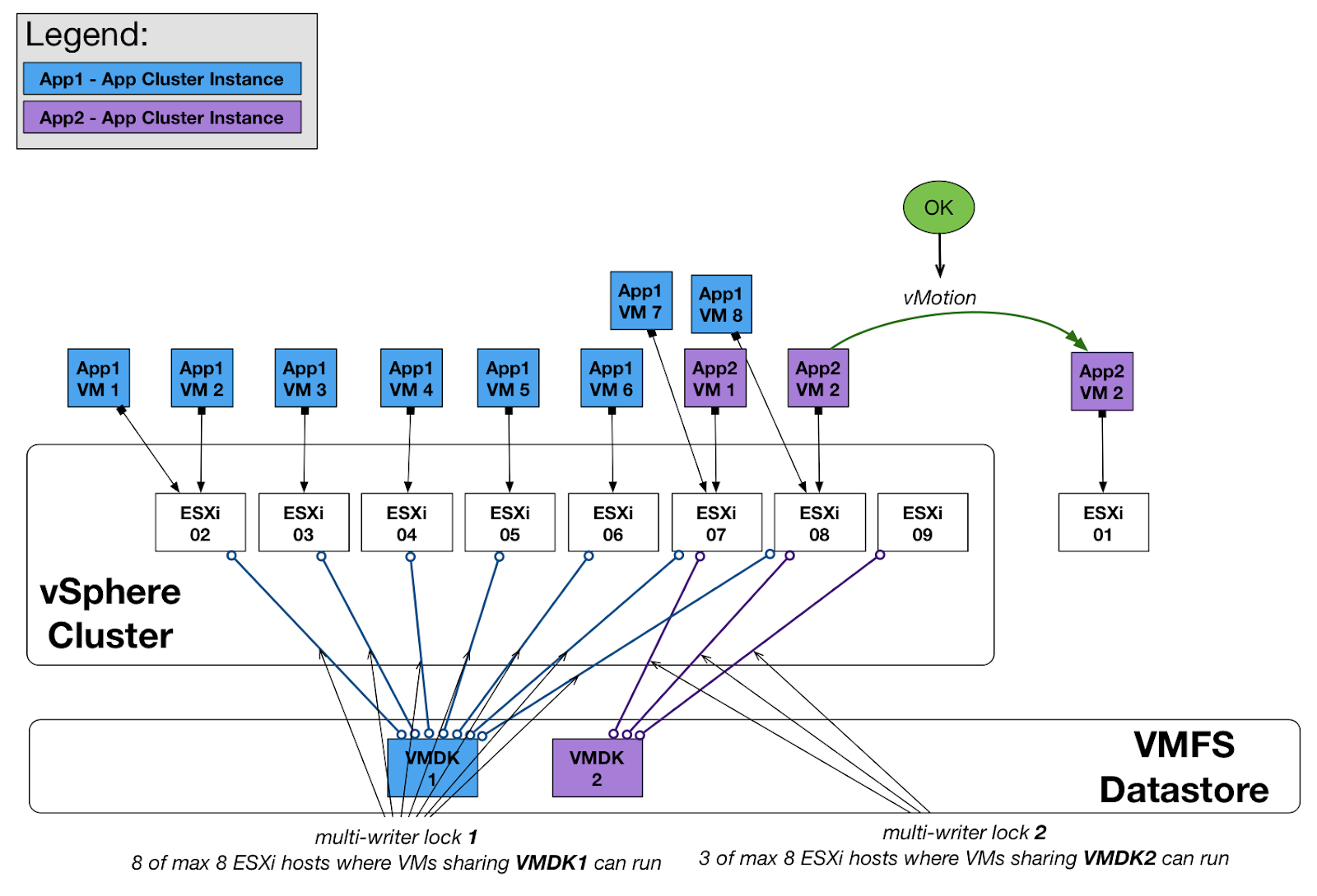 Q: What exactly does it mean the limitation of 8 ESXi hosts?

A: 8 ESXi host limit implies how many ESXi hosts can simultaneously open the same virtual disk (aka VMDK file). If the cluster-aware application is not going to have more than 8 nodes, it works and it is supported. Details and various scenarios are described in this article.

Q: Where are stored the information about the locks from ESXi hosts?

A: The normal VMFS file locking mechanism is in use, therefore there are VMFS file locks which can be displayed by ESXi command: vmkfstools -D

The only difference is that multi-write VMDKs can have multiple locks as is shown in the screenshot below.

Q: Is it supported to use DRS rules for vmdk multi-write in case that is more than 8 ESXi hosts in the cluster where VMs with configured multi-write vmdks are running?

Q: How ESXi life cycle can be handled with the limit 8 ESXi hosts?

A: Let’s discuss specific VM operations and supportability of multi-write vmdk configuration. The source for the answers is VMware KB https://kb.vmware.com/kb/1034165

Q: Is it possible to migrate VMs with multi-write vmdks to different cluster when it will be offline?

A: Yes. VM can be Shut Down or Power Off and Power On on any ESXi host outside of the vSphere cluster. The only requirement is to have the same VMFS datastore available on source and target ESXi host. Please, keep in mind that the maximum supported number of ESXi hosts connected to a single VMFS datastore is 64.