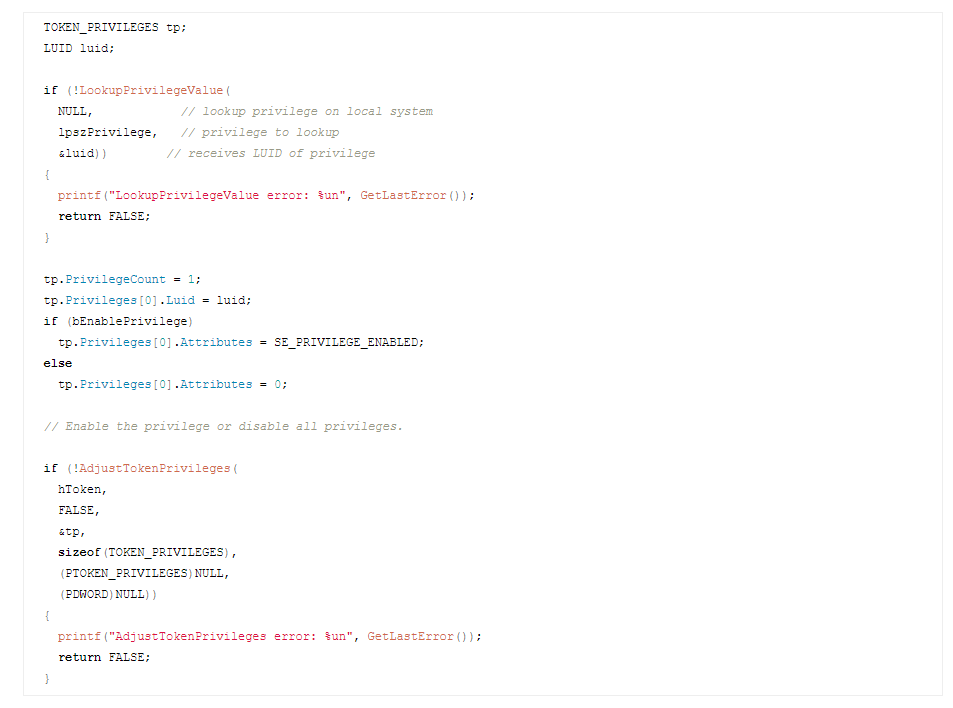 In Windows operating systems, it is well known that assigning certain privileges to user accounts without administration permissions can result in local privilege escalation attacks. Although Microsoft’s documentation is quite clear about it, throughout several pentests we have found privilege assignment policies assigned to ordinary users, that we have been able to exploit to take full control over a system.

Today, we will analyze the impact associated to the assignment of the “Load and unload device drivers” policy, which specifies the users who are allowed to dynamically load device drivers. The activation of this policy in the context of non-privileged users implies a significant risk due to the possibility of executing code in kernel space.

Although this is a well known technique, it can not be found in post-exploitation and privilege escalation tools, and there are no tools which carry out automatic exploitation neither.

NOTE: The print operators group may seem quite innocuous to the naked eye, however it has the ability to load device drivers in domain controllers as well as manage printer-type objects in the active directory. Additionally, this group has the capabilities to authenticate itself in a domain controller, so it is of special interest to verify the membership of users in this group.

An access token is a type of object that describes the security context of a process or thread, and is assigned to all processes created in the system. Among other things, it specifies the SID (Security identifier) that identifies the user account, the SIDs linked to the different groups of which it is a member, as well as the list of privileges assigned to the user or to the groups to which he belongs to. This information is essential in the access control model of the operating system and this information is verified every time that you try to access any securizable object in the system.

To understand the exploitation procedure (which will be explained later), it is necessary to take into account that starting from Windows Vista, the operating system implements a privilege separation technique called “User Account Control”, better known as UAC. As a summary, this security measure is based on the “minimum privilege principle” limiting the privileges of certain processes of the user through the use of ‘restricted access tokens‘, which omit certain privileges assigned to the user.

Taking into account this information, we will analyze the exploitation process of this privilege to load a driver from a user account without administration permissions

In order to obtain an unrestricted access token we have the following options:

Once we have an unrestricted token we can notice that, by default the SeLoadDriverPrivilege is available in the user’s privilege list on the access token but disabled by default. To make use of the privilege it is necessary to activate it explicitly. In order to accomplish this we have to perform the following steps. First we’ll need to acquire a reference of the privilege by using LookupPrivilegeValue() API. After that, the function AdjustTokenPriviliges() can be used to activate the privilege.

Loading drivers from user space can be done using the Windows NTLoadDriver API, its format is detailed below:

This function takes as the only input parameter DriverServiceName, a pointer to a string in UNICODE format which specifies the registry key that defines the driver configuration:

Under the DriverName key there are different configuration parameters that can be defined. The most relevant are:

One thing to keep in mind is that the registry key passed to NTLoadDriver is by default located under the HKLM key (HKEY_LOCAL_MACHINE), which defines modification permissions only to the Administrators group. Although the documentation indicates the use of the key ” Registry Machine System CurrentControlSet Services “, the NTLoadDriver API does not restrict paths under the HKCU (HKEY_CURRENT_USER) key, which can be modified by non-privileged users.

Taking into account this situation, when invoking the NTLoadDriver API, it will be possible to use a registry key under HKCU (HKEY_CURRENT_USER), specifying a path following this format:

The account’s SID value can be obtained programmatically by using the GetTokenInformation API, which allows the user to obtain his access token information. Alternatively, the SID can be consulted using the “whoami /all” command, or through the following PowerShell instructions:

To abuse the driver loading privilege, a PoC application has been created in order to automate the procedure described above.

A starting point is a non-privileged user (test) to which the privilege “Load and unload device drivers” has been assigned.

As discussed earlier, initially the user will be assigned a restricted token, which does not include the SeLoadDriverPrivilege privilege.

If you have an interactive session, you can perform the elevation token elevation by accepting the UAC prompt, otherwise you should use some UAC bypassing technique.

In this specific case we assume that there is an interactive session in the system. By using the tool elevate, a new terminal with an associated unrestricted token can be spawned, after accepting the UAC prompt.

As you can see the privilege “SeLoadDriverPrivilege” is present in the user’s access token, however it is disabled.

Obtaining an unrestricted token in a non privileged account

At this point we can use the PoC tool EOPLOADDRIVER (https://github.com/TarlogicSecurity/EoPLoadDriver/), which will allow us to:

The tool can be invoked as shown below:

The RegistryKey parameter specifies the registry key created under HKCU (“Registry User{NON_PRIVILEGED_USER_SID}”, while the DriverImagePath specifies the location of the driver in the file system.

It is possible to verify the driver was loaded successfully using the DriverView tool.

Once we have been able to load a driver from an unprivileged user account, the next step is to identify a signed driver that has a vulnerability that allows to elevate privileges.

This driver has different public exploits:

Following the procedure described above, we need to spawn an elevated terminal in order to obtain an unrestricted token. After this, we can execute the PoC tool (EOPLOADDRIVER) to enable the SeLoadDriverPrivilege and load the selected driver as shown below: 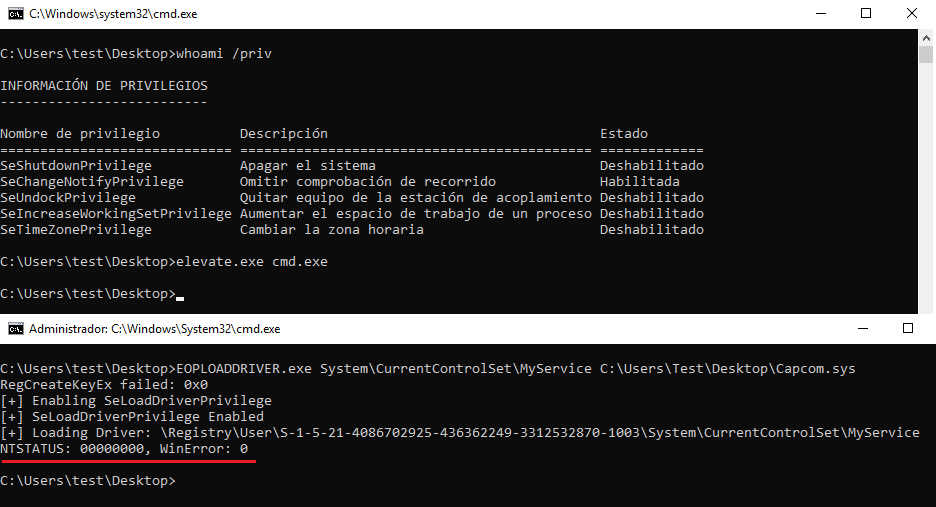 Elevation of command prompt and execution of EOPLOADDRIVER

Once the driver is loaded it is possible to run any desired exploit. The following image shows the use of Tandasat’s exploit “ExploitCapcom” to obtain a terminal as SYSTEM.

We have been able to verify how the assignment of the “Load and unload device drivers” privilege enables the dynamic loading of drivers in the kernel. Although by default Windows forbids unsigned drivers, multiple weaknesses have been identified in signed drivers that could be exploited to completely compromise a system.

All tests have been performed in a Windows 10 Version 1708 environment.

As of Windows 10 Version 1803, NTLoadDriver seems to forbid references to registry keys under HKEY_CURRENT_USER.