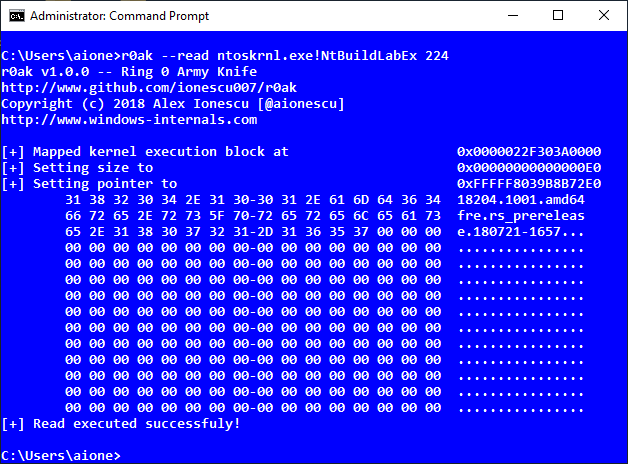 r0ak is a Windows command-line utility that enables you to easily read, write, and execute kernel-mode code (with some limitations) from the command prompt, without requiring anything else other than Administrator privileges.

Motivation
The Windows kernel is a rich environment in which hundreds of drivers execute on a typical system, and where thousands of variables containing global state are present. For advanced troubleshooting, IT experts will typically use tools such as the Windows Debugger (WinDbg), SysInternals Tools, or write their own. Unfortunately, usage of these tools is getting increasingly hard, and they are themselves limited by their own access to Windows APIs and exposed features.
Some of today’s challenges include:

In such an environment, it was clear that a simple tool which can be used as an emergency band-aid/hotfix and to quickly troubleshoot kernel/system-level issues which may be apparent by analyzing kernel state might be valuable for the community. 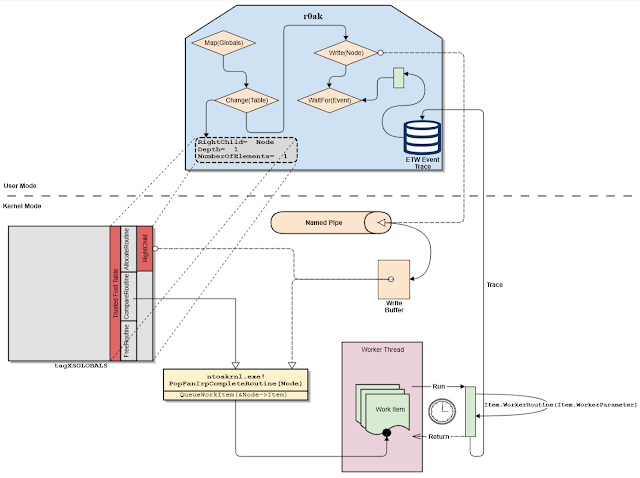 r0ak works by redirecting the execution flow of the window manager’s trusted font validation checks when attempting to load a new font, by replacing the trusted font table’s comparator routine with an alternate function which schedules an executive work item (WORK_QUEUE_ITEM) stored in the input node. Then, the trusted font table’s right child (which serves as the root node) is overwritten with a named pipe’s write buffer (NP_DATA_ENTRY) in which a custom work item is stored. This item’s underlying worker function and its parameter are what will eventually be executed by a dedicated ExpWorkerThread at PASSIVE_LEVELonce a font load is attempted and the comparator routine executes, receiving the name pipe-backed parent node as its input. A real-time Event Tracing for Windows (ETW) trace event is used to receive an asynchronous notification that the work item has finished executing, which makes it safe to tear down the structures, free the kernel-mode buffers, and restore normal operation.

Supported Commands
When using the --execute option, this function and parameter are supplied by the user.
When using --write, a custom gadget is used to modify arbitrary 32-bit values anywhere in kernel memory.
When using --read, the write gadget is used to modify the system’s HSTI buffer pointer and size (N.B.: This is destructive behavior in terms of any other applications that will request the HSTI data. As this is optional Windows behavior, and this tool is meant for emergency debugging/experimentation, this loss of data was considered acceptable). Then, the HSTI Query API is used to copy back into the tool’s user-mode address space, and a hex dump is shown.
Because only built-in, Microsoft-signed, Windows functionality is used, and all called functions are part of the KCFG bitmap, there is no violation of any security checks, and no debugging flags are required, or usage of 3rd party poorly-written drivers.

Is this a bug/vulnerability in Windows?
No. Since this tool — and the underlying technique — require a SYSTEM-level privileged token, which can only be obtained by a user running under the Administrator account, no security boundaries are being bypassed in order to achieve the effect. The behavior and utility of the tool is only possible due to the elevated/privileged security context of the Administrator account on Windows, and is understood to be a by-design behavior.

Was Microsoft notified about this behavior?
Of course! It’s important to always file security issues with Microsoft even when no violation of privileged boundaries seems to have occurred — their teams of researchers and developers might find novel vectors and ways to reach certain code paths which an external researcher may not have thought of.
As such, in November 2014, a security case was filed with the Microsoft Security Research Centre (MSRC) which responded: «[…] doesn’t fall into the scope of a security issue we would address via our traditional Security Bulletin vehicle. It […] pre-supposes admin privileges — a place where architecturally, we do not currently define a defensible security boundary. As such, we won’t be pursuing this to fix.»
Furthermore, in April 2015 at the Infiltrate conference, a talk titled Insection : AWEsomely Exploiting Shared Memory Objects was presented detailing this issue, including to Microsoft developers in attendance, which agreed this was currently out of scope of Windows’s architectural security boundaries. This is because there are literally dozens — if not more — of other ways an Administrator can read/write/execute Ring 0 memory. This tool merely allows an easy commodification of one such vector, for purposes of debugging and troubleshooting system issues.

Can’t this be packaged up as part of end-to-end attack/exploit kit?
Packaging this code up as a library would require carefully removing all interactive command-line parsing and standard output, at which point, without major rewrites, the ‘kit’ would:

Attackers interested in using this particular approach — versus very many others more cross-compatible, no-SYSTEM-right-requiring techniques — likely already adapted their own code based on the Proof-of-Concept from April 2015 — more than 3 years ago.

Requirements
Due to the usage of the Windows Symbol Engine, you must have either the Windows Software Development Kit (SDK) or Windows Driver Kit (WDK) installed with the Debugging Tools for Windows. The tool will lookup your installation path automatically, and leverage the DbgHelp.dll and SymSrv.dll that are present in that directory. As these files are not re-distributable, they cannot be included with the release of the tool.
Alternatively, if you obtain these libraries on your own, you can modify the source-code to use them.
Usage of symbols requires an Internet connection, unless you have pre-cached them locally. Additionally, you should setup the _NT_SYMBOL_PATH variable pointing to an appropriate symbol server and cached location.
It is assumed that an IT Expert or other troubleshooter which apparently has a need to read/write/execute kernel memory (and has knowledge of the appropriate kernel variables to access) is already more than intimately familiar with the above setup requirements. Please do not file issues asking what the SDK is or how to set an environment variable.

These are only a few examples — all Ring 0 addresses are accepted, either by module!symbol syntax or directly passing the kernel pointer if known. The Windows Symbol Engine is used to look these up.

Limitations
The tool requires certain kernel variables and functions that are only known to exist in modern versions of Windows 10, and was only meant to work on 64-bit systems. These limitations are due to the fact that on older systems (or x86 systems), these stricter security requirements don’t exist, and as such, more traditional approaches can be used instead. This is a personal tool which I am making available, and I had no need for these older systems, where I could use a simple driver instead. That being said, this repository accepts pull requests, if anyone is interested in porting it.
Secondly, due to the use cases and my own needs, the following restrictions apply:

Obviously, these limitations could be fixed by programmatically choosing a different approach, but they fit the needs of a command line tool and my use cases. Again, pull requests are accepted if others wish to contribute their own additions.
Note that all execution (including execution of the --read and --write commands) occurs in the context of a System Worker Thread at PASSIVE_LEVEL. Therefore, user-mode addresses should not be passed in as parameters/arguments.