So, what is the ESP8266? Wikipedia describes it as follows:

At present, my version of IDA does not recognise this processor, but looking up “IDA Xtensa” unveils a processor module to support the instruction set, which is described as follows:

This is a processor plugin for IDA, to support the Xtensa core found in Espressif ESP8266.

With the above information, we’ve also answered our second question of “What is the processor?“.

Now that IDA can understand the instruction set of the processor, it’s time to learn how firmware images are comprised in terms of format, data and code. Indeed, what is the format of our firmware image?. To help answer this question, my first point of call was to analyse existing open source tools published by Expressif, in order to work with the ESP8266.

This leads us to ESPTool, an application written in Python capable of displaying some information about binary firmware images, amongst other things.

The manual for this tool also gives away some important information:

The elf2image command converts an ELF file (from compiler/linker output) into the binary executable images which can be flashed and then booted into.

From this, we can determine that compiled images, prior to their transformation into firmware, exist in the ELF-32 Xtensa format. This will be useful later on.

Moving back to the other features of ESPTool, we see it’s indeed able to present information about our firmware image:

Clearly, this application understands the format of an image, so let’s take it apart and see how it works.

Browsing through the code, we come across:

All of the above code is notable. It allows us to discern the structure of the firmware image.

Which represented as a structure would look like this:

We can see from the function load_segment() that following our image header are the image segment headers, followed immediately by the segment data itself, for each segment.

Which again, represented as a structure would be as follows:

This is helpful, we now know both the format of the firmware image and a number of the tools available to process such images. It’s worth noting that we haven’t considered elements such as checksums, but these aren’t important to us as we don’t intend on patching the firmware image.

Whilst a tangent, it’s worth noting that whilst in this case, our format has been documented and tools exist to parse such formats, often this is not the case. In such cases, I’d advise obtaining as many firmware images as you can from your target devices. At that point, a starting point could be to find commonalities between them, which could indicate what certain bytes mean within the format. Also of use would be to understand how an image is booted into, as the bootloader may act differently depending on certain values at fixed offsets.

So, onto our next question, what is the boot process of the device? Understanding this is important as it will help to clarify our understanding of the image. Richard Aburton has very helpfully reverse engineered the boot loader and described the following key point:

Checking the 0×1000 offset within our firmware image, there is indeed a second image, as denoted by presence of the image magic signature (0xE9):

This second firmware image sits almost immediately after the padding bytes we observed earlier. Based on the format, we can see from the second byte (0×04) that this ROM has 4 segments and is likely to be user or custom ROM code, with the first ROM image potentially being the bootloader of the device, responsible for bootstrapping.

Whilst there are a lot of nuances to the boot process, the above is all we really need to be aware of at this time.

From the information within, we can conclude the following:

Anything that doesn’t match an address exactly, we’ll mark as unknown and classify as either code or data based on the rules above.

It should be noted that simply loading the file as ‘binary’ within IDA, having set the appropriate processor, allows for limited understanding and doesn’t display any xrefs to strings that could guide our efforts: 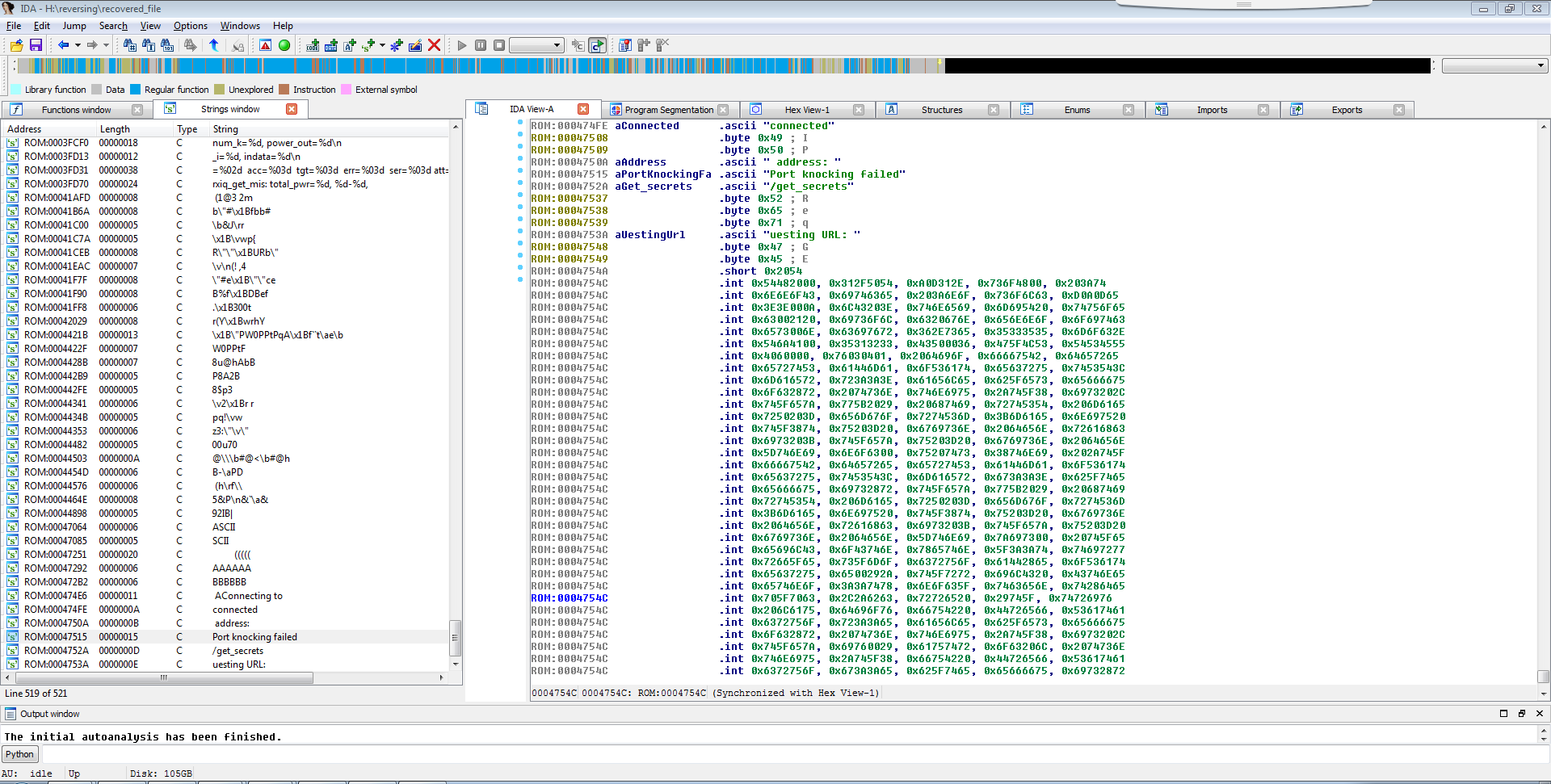 With this in mind, we can write a simple loader for IDA to identify the firmware image and load the segments accordingly, which should yield better results. We’ll use the memory map above as a guide to name the segments and mark them as code or data accordingly.