Coinciding with my previous two posts, here’s how you can crash or at least detect VMware and many other hypervisors:
https://gist.github.com/drew1ind/d31840bebbbb1ff1d112a6f46e162c05Backstory:
When I was writing a simple SEH emulator (following the documentation on msdn as well as this excellent blogpost) for my hypervisor, I was testing under VMware. 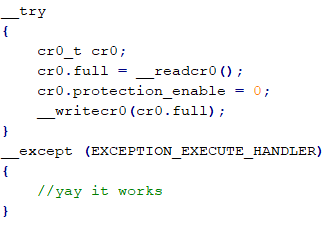 When trying to execute that, I found that VMware would instantly close without any message. After being stumped for a while, I tried on my PC only to find that my SEH emulator did, in fact, work.
When I talked about it with my friend daax (whose blog can be found over at https://revers.engineering/), he recalled experiencing the exact same issue (albeit with different motivations): when he tried to unset CR0.pe to cause a #GP(0), VMware would just close on him. This eventually drove me to the conclusion that VMware was improperly handling the CR access VM exit for CR0, or more specifically, they don’t check that cr0.pg is already enabled, which would normally cause a #GP(0). Since they write the invalid value into the guest CR0 VMCS field, the processor objects upon VM entry in the form of a VM entry failure, which VMware responds to by just closing itself.
Additional checks in that gist linked above rely on hypervisors not properly emulating CPU behaviour, which includes:
Fixes for such include: